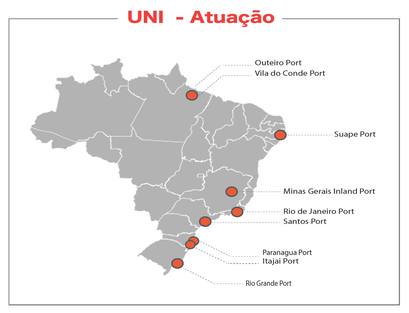 The most important Brazilian ports
​
Porto de Santos – SP Located in the city of Santos-SP, this port is the largest in Brazil and one of the busiest in Latin America, currently serving 26 Brazilian states. The Porto de Santos is especially important for São Paulo state’s economy, around 90% of its industrial base is located in a radius of 200 kilometers from the port. The port is also responsible for 28% of Brazilian foreign trade.
Even though Santos is the most important port of the country, it is the one that has the highest number of problems, especially related with the workforce. The work schedules are always incorrect and burden the professionals. Also the workers are constantly unsatisfied, and therefore organising a lot of strikes.
Among the most marketed products at this port are sugar, soy, containerized cargo, coffee, corn, wheat, salt, citrus pulp, orange juice, paper, automobiles and alcohol.
The Porto de Santos is currently administered by the Companhia Docas do Estado de São Paulo (Codesp).

Porto de Vitória – ES Administrated by the Companhia Docas do Espírito Santo (Codesa), the Porto de Vitória is located in the homonym city, capital of the Espírto Santo state.

The Porto de Vitória is one of the Brazilian ports that lacks the most investment in infrastructure, especially to enhance access for larger vessels. But despite projects being outlined, construction is still unfinished.
The idea is to turn the Vitória port complex into one of the main bases of support for the Brazilian oil and gas industry, mainly because of its proximity with producing centers and the fact that the Macaé complex is saturated.
Among the main products that circulate through the Porto de Vitória are steel products, soluble coffee beans, cocoa, cereals, marble and granite, iron, pig iron and bulk.

Porto de Paranaguá – PR Porto de Paranaguá is the largest Brazilian port exporting agricultural products, with emphasis on soybeans and soybean meal. However the port is currently saturated, and is not following the growth of the Brazilian agriculture. The port lacks structure to handle the current volume of exports.
Another related problem is the access routes that lead to the port, where the trucks wait in line for days until they get the opportunity to ship. Some of them can even wait for a month.
The port has also received several complaints about its irregularities when it comes to the compliance with environmental and sanitary measures.
As the second largest Brazilian port, it mainly receives ships from United States, China, Japan, South Korea and Paraguay.

Porto de Rio Grande – RS Privileged by its geographic features, the Porto de Rio Grande has consolidated its position as the port of the Southern Cone of South America. The port is public and administered by the Rio Grande do Sul state government.
Among the major commodities exported are soybeans, soybean meal, wheat and rice. The main export destinations are China, Spain, Holland, Japan and France. Among the main imported goods are urea, granular potash, natural calcium phosphate and sulfuric acid. On imports, the main source countries are Argentina, Morocco, Lithuania, China and the United States.
Rio Grande is one of the most developed ports in Brazil with good logistics and projects for expansion. The port is also one of the few in the country that is not saturated, and that has a long wharf. It is for this reason why importers and exporters are preferring to flow its production through Rio Grande instead of Paranaguá.

Porto de Rio de Janeiro – RJ Located on the West coast of the famous Baia de Guanabara, the Porto de Rio de Janeiro is administrated by the Companhia Docas do Rio de Janeiro.
The logistical problems of access to the Rio de Janeiro’s port are evidenced by the poor maintenance of the roads, lack of secondary access channels and of a plan that involves achieving a cleaner flow of cargo, bad distribution of the railroads, lack of investment in infrastructure and "lack of political will" to make possible a project that addresses the logistics bottlenecks that are common routes of access to container terminals in the port of Rio de Janeiro.
Despite all the mentioned problems, Rio de Janeiro’s is one of the busiest ports in the country in terms of value of goods and tonnage. Iron ore, manganese, coal, wheat, oil and gas are the main products disposed.

Porto de Itajaí – SC This port is administered by the Superintendent of the Port of Itajai, local authority of the city of Itajai in Santa Catarina state. The main exported products are wood, ceramic flooring, machinery, sugar, paper and tobacco. The main imports are wheat, chemicals, motors, textiles, paper, chicken and ceramic flooring.
The big problem about Itajaí is the constant floods that happen in the region, bringing difficulties to its work dynamics and needing rebuilding and reform every now and then. Also, the accessing routes to the port are currently saturated.

Porto de São Sebastião – SP Currently administrated by the Companhia Docas de São Sebastião, this port was created with the intention to alleviate the traffic in the Porto de Santos.
As the Porto de Santos gets more and more saturated, the need to transfer part of its shipments to the São Sebastião port becomes evident. That is why there is a project to enlarge São Sebastião, which is currently awaiting for some authorities approval. The situation generated a standstill between environmentalists, politicians and investors as the construction will cause damage to the environment and the local population.
The main import products are soda ash, sodium sulfate, malt, barley, wheat, steel products, machinery and equipment, coils of steel wire and general cargo. The main exported products, in turn, are: vehicles, parts, machinery and equipment, steel products and general cargo.

Porto de Itaqui – MA Administrated by the Company of Maranhão Port Administration (Emap), the Porto de Itaqui is located in the city of São Luís, the capital of the Northern Maranhão state.
From this port the following products are discharged: petroleum products, fertilisers, general cargo, rice, wheat, LPG, vegetable oil, rails, anthracite and lots of projects. Exported products are aluminum, copper, ethanol, pig iron, soybean meal, manganese ore and soybeans.
Even though it is located in a strategic area of the country and receiving a lot of investment, Itaqui is in a terrible state, lacking several reforms in its structure.

Porto de Aratu – BA Located in the city of Candeias, in the region known as Baía de Todos os Santos, the Porto de Aratu is of great importance to the Bahia state economy. The port is administrated by the Companhia Docas do Estado da Bahia (Codeba).
The Port of Aratu receives and drains the industrial production of Bahia, most coming from the Northeastern Complex of Camaçari. The main products that circulate in the port are transport gasoline, sulfur, ammonia, naphtha, fertiliser, copper concentrate and coal.